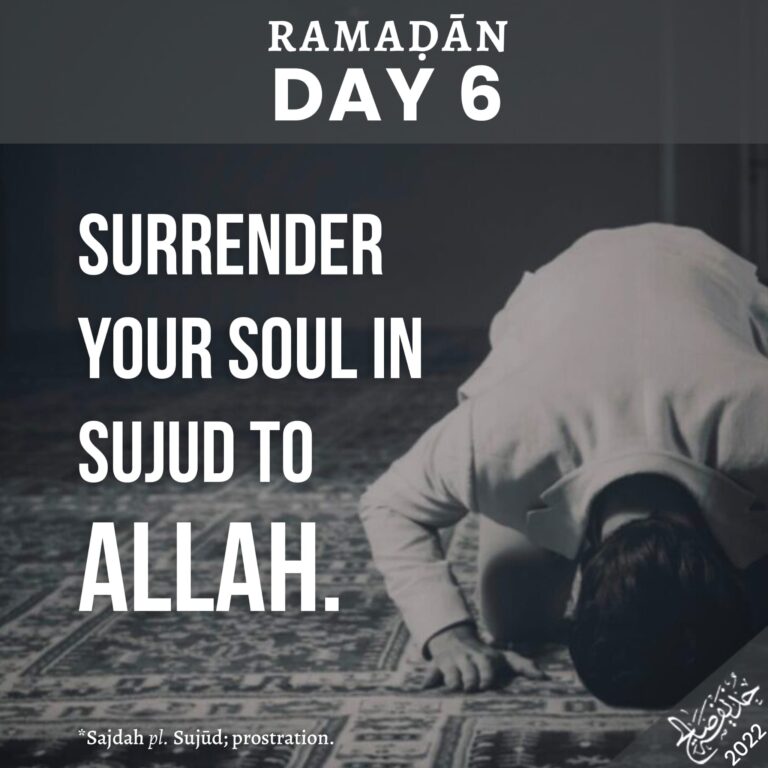 The ʿabd (servant) is subsequently prescribed to say “Allāh is the Most Great” and then to fall down in prostration to the floor to let all his limbs individually demonstrate their servitude to Allāh; his forehead placed on the floor before his Lord, his face – the most honorable part of his body – comes together with the dust on the floor, and all the while his heart humbles itself to Allāh. The arrangement of this posture is such that his lower body ends up in a higher level than his upper limbs (i.e. the face), emphasizing his submission. His heart and body are thus rendered humble and submissive before the Greatness and Glory of the Lord. Moreover, when the state of the heart conforms to the state of the body in this position (i.e. both are humble, submissive and down to earth), it is as if the heart too prostrates to Allāh along with the forehead, nose, face, hands, knees and feet. An ʿabd with such humility and submissiveness shall be among Allāh’s favoured servants. This is because the closest an ʿabd comes to his Lord is when he is in the state of prostration.

In this posture, it is prescribed for the ʿabd to not have any part of his body depend on any other part for support; that is, he should avoid placing the weight of his thighs on his legs, maintain a space between his belly and his legs, and keep a space between his arms by spreading them to the sides away from his body. This is so that each part of his physical self can individually demonstrate its slavery to Allāh. And it follows from what has been said that the slave (of Allāh) should in this posture be at the closest point to his Lord, as the Prophet Muḥammad ṣallallāhu ʿalayhi wasallam said: “The closest an ʿabd is to his Lord is when he is prostrating.”

[Inner Dimensions of the Prayer by Imām Ibn Qayyim al-Jawziyyah]